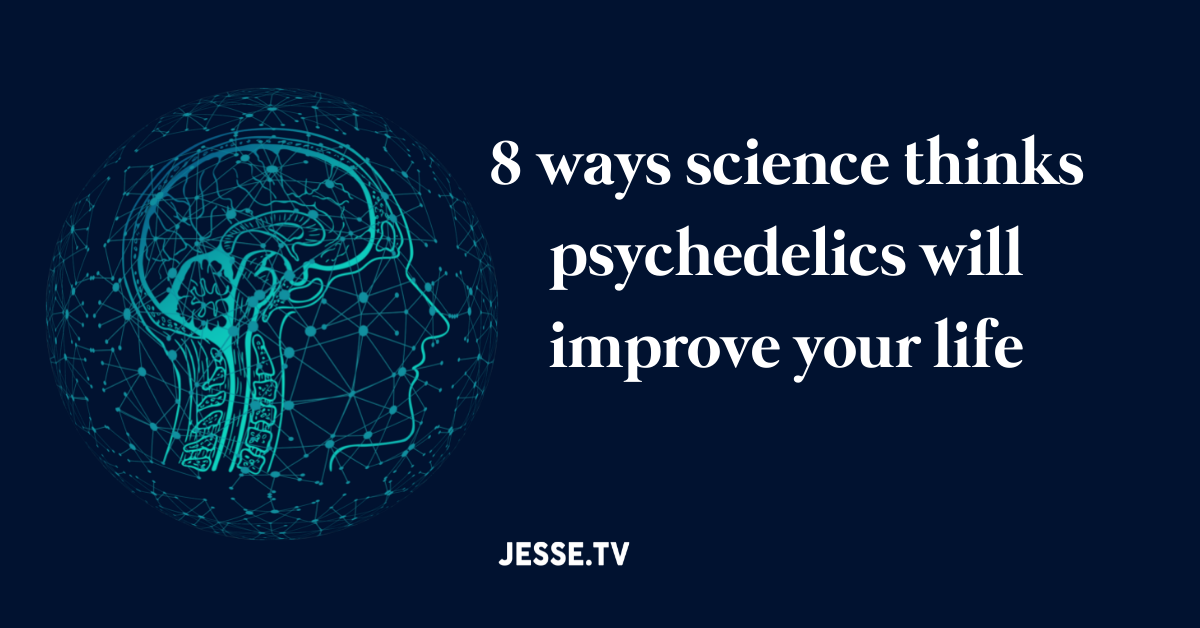 Psychedelics are no longer just “hippie drugs!” Scientific studies show that psychedelics (such as psilocybin mushrooms) have positive effects on our emotional intelligence, mental alertness, psychological health, and can even help treat addictions.

And this is just the tip of the iceberg – so much more research needs to be done to prove to Western minds what the shamans of old already knew: that plants HEAL!

Here are 8 ways that science has found that psychedelics can improve your life:

1. Increase your productivity and mental alertness

A 2019 study revealed that microdosing over a period of time improved the productivity and mental alertness of those who participated. Many even reported long term benefits such as improved absorption of material, such as when listening to music or seeing art.

See Microdosing: A Journey into the Unknown on Jesse.tv for more about this study.

2. Improve leadership by killing your ego

Scientists actually did a study in which they found a correlation between psychedelics and the dissolution of the ego – or in other words, killing the ego. Their research shows that psychedelics could help in shedding the sense of self, or ego.

Check out Three Ways that Psilocybin Truffles can Help You Become a Great Leader on Jesse.tv for more about this study.

Studies show that controlled use of psilocybin truffles can rewire the brain such that PTSD and depression can be treated. This was especially effective in patients who had previously suffered from treatment-resistant depression.

See Psilocybin: Meet Your New Therapist on Jesse.tv for more about this study.

While you can’t become “smarter” from taking psilocybin truffles, one study did show that microdosing truffles can improve your ability to think outside-the-box. And we all know that sometimes the greatest minds are those who are thinking outside-the-box!

Check out Microdosing: A Journey into the Unknown on Jesse.tv for more about this study.

See Three Ways that Psilocybin Truffles can Help You Become a Great Leader on Jesse.tv for more about this study.

Research shows that DMN (the Default Mode Network) is the part of our brain that kicks in when we “daydream” or become distracted by thoughts. When DMN is deactivated, we experience focus – presence. And studies show that psilocybin mushrooms effectively rewired and decreased DMN activity in those who volunteered for the study!

Plus – another study was done examining the impact of magic mushrooms on the “Big Five” elements of personality: Neuroticism, Extraversion, Openness, Agreeableness and Conscientiousness. While many traits remained the same before and after the experiment, many scored higher on “openness” after the trip.

Check out these articles on Jeses.tv for more:

7. Shift your personality (at any age)

It is often difficult to change aspects of ourselves after a certain age – we become kind of “fixed.” In fact, many believe that after 30 years old, it becomes difficult to change. However, one study showed that regardless of your age, it is possible to change with the help of magic truffles. Participants showed significant and lasting personality changes that were apparent even months after the tests were completed.

See Age is Just a Number on Jesse.tv for more about this study.

Many participants in studies report significant shifts in their lives after going through clinical studies – and often times this leads to the cessation of addictions. In fact, psilocybin is thought to play a helpful role in treating cigarette addictions.

Check out Age is Just a Number on Jesse.tv for more about this study.

In the Western world, we believe: “Let me see it first, then I’ll believe…” And in native tribes around the world, the belief is the complete opposite: “Let us first believe and THEN we will SEE…”

So yes – these studies are helpful to us in the West because they speak to us in “our own language.” For many of us, it may be easier to believe that psychedelics have healing properties if we can see that science supports it.

And if that’s how we come to understand the magic of plant medicine – then this is a great starting point! But remember – the shamans of old knew all of this already, they come to the plants with their belief and faith first, and then are rewarded with the benefits that we’re only just now exploring in these scientific studies.

And lastly, let us not forget that psychedelics, such as psilocybin mushrooms, were initially intended to be plant medicines. And for that reason, benefits like increased productivity and creativity are merely the fringe benefits of deeper healing and connection that happens when we invite nature’s medicine to work with us.

Check out TruffleHealing.com if you’re interested in more about going beyond the fringe benefits and entering the traditions of sacred plant medicine.

For more information on Jesse.tv about these studies – check out the following blog articles:

And if you’d like to see the full studies sourced for this article, check out these links: